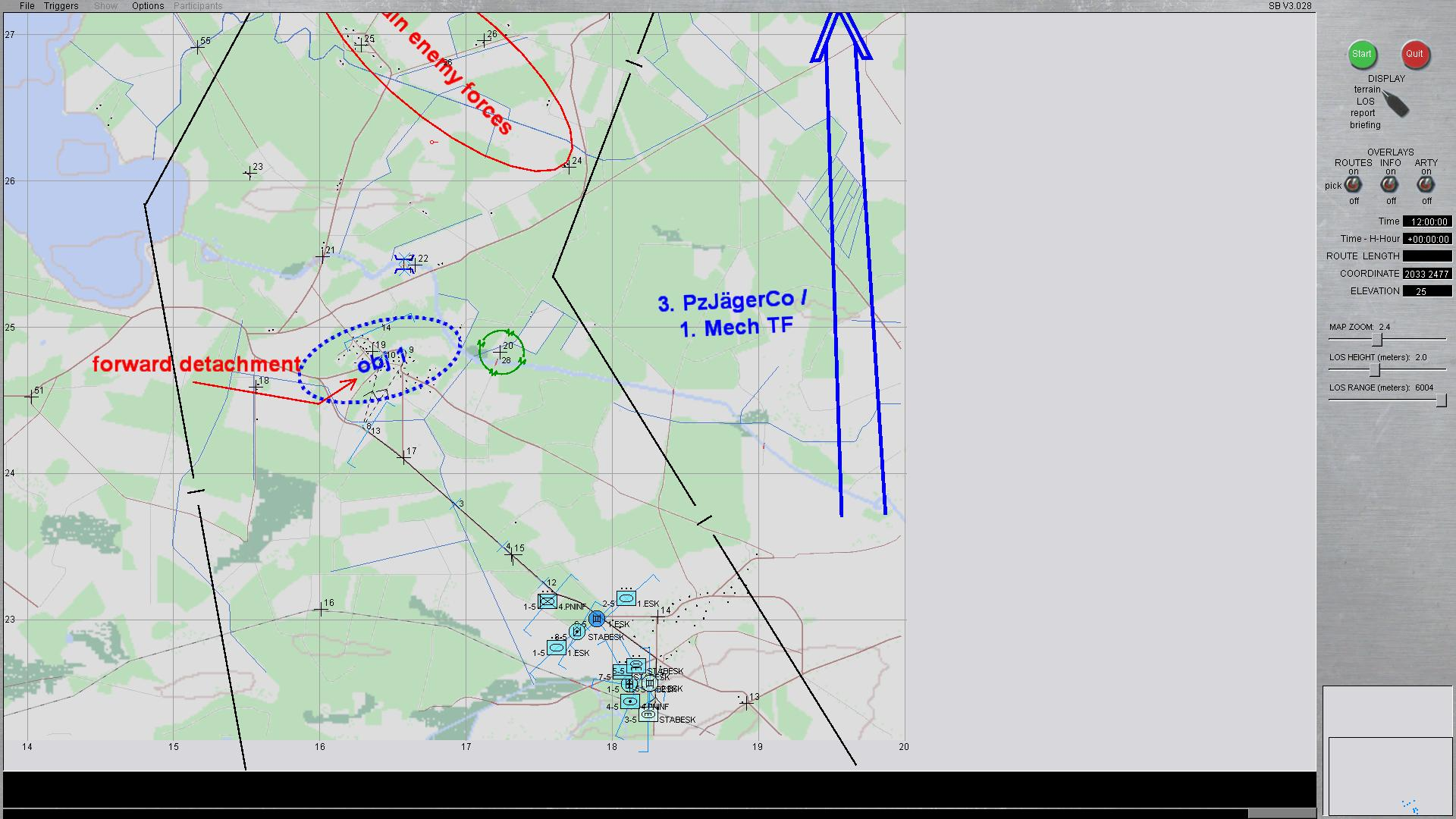 Mech TF CO's orders to you:

ENEMY:
Enemy 63rd Mech Rifle Regiment is attacking south-west via the Highway 6. Its forward units are already in battle with our InfBn107. The Bn should be able to hold out for one more day - but then a breakthrough is possible. The regiment has covered its left flank with quite strong detachment (we believe around 2 companies of Mech Infantry + possible tank detachments, possible guarding the whole Division's flank!). The detachment has already conducted recon by fire against our Jäger Bn 101 suffering minor casualties.

FRIENDLY:
Jäger Bn has moved in to block the enemy flank guard units from advancing further west. 1. MechTF has moved to the area and has suffered casualtied from enemy air attacks. 1st Tank Co+ (ELVIS - you!) has reached R15 (Ref Point 15) and is ready to attack north. Armoured Recce platoon (EYE) is already in the objective area giving out info on the enemy.

MISSION:
1st MechTF attacks north towards Highway 6 and destroys enemy flank guard units. Attack must begin ASAP. After defeating the flank guards the TF will attack the Regiments flank to release the pressure on InfBn107 and to allow further counter-attacks by other friendly forces.

Commander's mission to subordinates (in the area):
1st Tank Co (ELVIS):
Attack to R19 - secure the area and be prepared to continue north towards R31. Destroy any resistance you run into - enemy is believed to have ~platoon size "doorbell" force in the village. After reaching R19 Mech Inf-Platoon (ARROW) will move in and hold the area while you continue the attack.

PzPioneer Platoon (SHOVEL):
Prepare to assist   1) 1st Tank Co in crossing the river and to breach possible enemy minefields
2) 3rd PzJäger Co
ELVIS, if you need the platoon - use TRIGGER 1 and the pioneers will be sent to R19 for your aid. If you don't need them they'll be ready to assist BLACK.

Mech Inf Platoon (ARROW):
After 1st has secured R19, move in and support the attack and hold the area. Be prepared to continue towards R31.

NOTES:
-EYE has found a suitable river crossing spot for you if the bridges are destroyed or mined. The spot is marked on your map! If you need to cross the river with the pioneers, use TRIGGER 2 to lay smoke screen to cover the crossing!
-Remember to report when you have reached the objectives (TRIGGER 4 and 5) and TF CO can coordinate his attack accordingly!
-Keep casualtied low - too many lost tanks will result in a defeat!
-3rd Platoon (Charlie) has suffered from mechanical failures and air attacks and is late for the attack. The platoon will join you ASAP!

Mission score is based on enemy casualties and objectives taken...

1) SITUATION:
a) Enemy:
[Describe the initial situation of "Red". Include Disposition, Strength, capabilities and Course of Action]

b) Own:
[Describe the initial situation of "Blue". Include higher command's intent. Also left,right and forward units' mission, as well as any reserve and support units]

2) MISSION:
[Provide a clear and concise statement of the task to be done (Who, What,When, Where and Why) from the Bn commander's mission]

b) Tasks to Maneuver units:
[Specify tasks other than in para 3a. and the purpose of each task. Each task should be listed in separate sub paragraphs.]