Catastrophe for sweden 2015 initial Meeting engagement
Excerpts of the battalion commander's orders for... 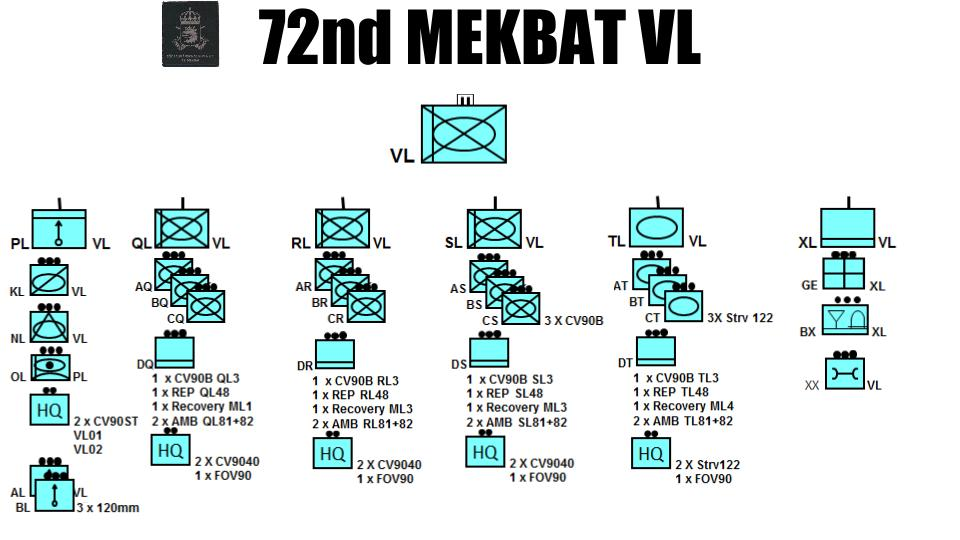 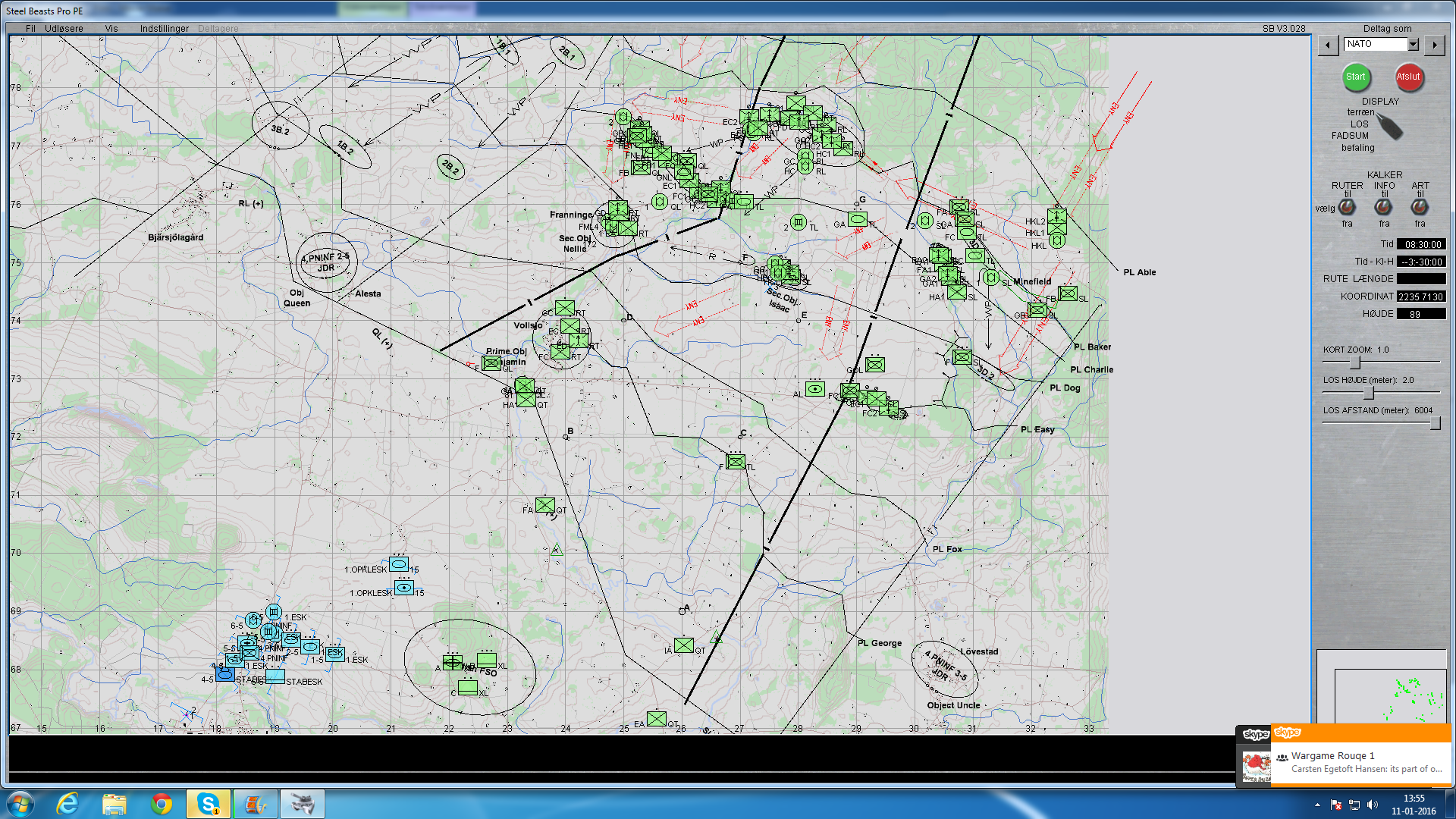 Russian forces have made an unprovoked attack on Sweden and have for the first 48 hours made lightning advances while the Swedish forces have been scrambling to mobilize.
Because of this, yesterday the Swedish government and their King and Queen have fled to Copenhagen and have asked to join NATO and NATO have rushed NRF Forces to Sweden as a result and late last night NATO officially accepted Sweden as their 29th member state.
NATO and Russia are now fully at war and all 29 states are mobilising.


Finland have been fighting since the beginning but have now been pushed back into the northern part of Sweden.

a) Enemy:
The Russian landing operations at Ystad and Trelleborg have failed because of the initial success of the Swedish air force and their Sea skimming anti ship missiles.
The landings at Härnösand, Gävle, Stockholm and Norrköping have had some success.
The Norrköping one have change direction to a more southerly direction and have for the last 36 hour been successful in driving down the coast and elements of the advance have been seen as far south as Karlskrona (8 Hours ago) and Kristianstad (2 Hours ago) and all indications seems to indicate they are trying to capture Malmö and Helsingborg to block further NATO Reinforcements

Their forces Comprises a mix of a few heavy (Tanks and IFV) and Marine landing light forces (BTR and a few old Tanks) and Airborne units but we expect that their force is about 1,5 DIV strong but due to attrition but also because they have to drop units along the way to secure their supply routes so they don’t get cut off their frontal strength are as follows:


b) Own:
The British have hurried in their 16 Air Assault Brigade and are trying to secure a line across Hässleholm, Ljungby and Växjö and will be reinforcing them with 20th Armoured Infantry Brigade from the UK.
The French Foreign Legion's Paratroop Battalion have been Dropped at Jönköping and Värnamo
The 72 Mech INF BTN from Revingehed have taken up a blocking Position between Vollsjö and Lövestad together with swedish Home Guard companies (from 46th Södra skånska HG bataljonen) in the area.
The 41 and 42 MECH INF BTN have secured the area north of Skövde and around Uddevalla north of Göteborg
The Danish Homeguard Mobile COYS have formed a brigade together with The Recruit conscripts that were almost finish with their 4 month service and have taken up blocking positions along A13 highway from Alesta to Höör.
From Lövestad to the coast the line is made up of swedish Home guard units until the 2nd and 3rd Danish NRF Battlegroup arrive and takes over the responsibility.

As soon as the rest of our Battle Group arrives we will together with the 72nd Swedish MECH INF BTN stop the Russian assault and start pushing back.


Right now and for the next 48 to 72 hours we will try to stabilize the situation and counter any incursion over this line
No artillery support are available to us yet since all domestic units is hard pressed atm. Limited Air Sorties might be available but almost all planes are currently tasked with attacking and trying to secure our airspace. This means for the time being we have local air superiority.

However, 1 BTY of M109A3 are on the way and will start giving fire support as soon as they arrive.

The situation is very uncertain, so Battlegroup and Company Commanders knows only the overall plan which might change at a moment's notice.

These 4 Swedish COYs, together with the 3 Danish NRF BGs are to be the disposition units of 1st Danish Brigade (4 BTNs +-)

The 1st SQN and 4th COY of Freja are the first to arrive because of lack of transport capacity the rest will arrive piecemeal inside of the next 24 hours so for the first meeting engagement it will be  QL COY, RL COY, SL COY, TL COY and ⅓ of Freja

c) Attachments and detachments:
See Above

2) MISSION:
Our Mission are to stabilize the front line and try to stop any further advance on this front from the Russians then to build up and start counterattacking

Eksjö, Skövde, Boden, Halmstad will make blocking positions and at all cost avoid being surrounded while trying to get the enemy's advance to bog down.


The 4 Swedish COYs are assigned as you see on the map with the danish Home Guard / Recruit BDE on the left and the swedish Homeguard BTNs on the right. Until the danish NRF BGs Arrive it is essential that we keep Object Benjamin and Object Nillie because they contain crossroads and intact bridges we will need later on.

Also to secure BG Freja we will dispatch a Mech INF PLT to Obj. Queen (Freja 4.2) and Obj. Uncle (Freja 4.3) they are to go there with all haste as soon as they arrive in the area.
The rest of the Spearhead from BG Freja are to coordinate with the 4 Swedish COYs on where they are needed when they arrive. The enemy is bound to attack soon so the Freja Spearhead is to maintain 10 minutes readiness.

b) Tasks to Maneuver units:
[Specify tasks other than in para 3a. and the purpose of each task. Each task should be listed in separate subparagraphs.]