The sequence of Danish TOW Vehicles

It started with the 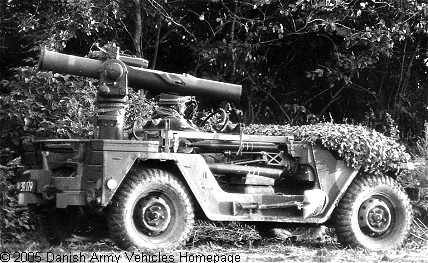 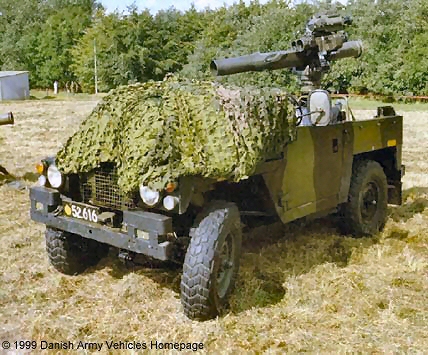 The launcher has gone through several up-grades and is today equipped with thermal sights. Effective range is between 65 and 3.700 m (improved TOW). 84 launchers implemented
We experimented with Thermal viewing camouflage with them by using tarpaulin with first aid thermal blanket tape to the backside and then covered with the camouflage netting it made the hotspot very very small just like a small stationary animal, and very very difficult to id as target worth shooting at if you could even find it. It was a trial and error period , while doing it but since the Danish army artillery FOs had the best thermal viewer and laser range finder (With active cooling) in the army at that time i got involved in it. It was only the sight sticking out that gave any kind of hotspot both the Gunner and driver and vehicle could be covered as well as the launcher it self and at the engagement ranges that TOW normally uses that made them almost impossible to find. 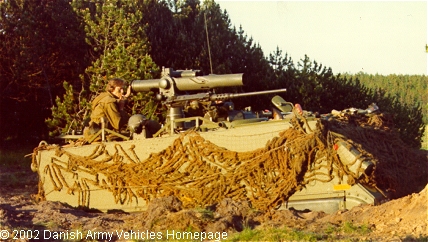 56 M113 is equipped with 147 mm TOW-launcher (M/87). Each vehicles carries 10 missiles. The launcher has gone through several up-grades and is today equipped with thermal sights. Effective range is between 65 and 3.700 m (improved TOW). The vehicle is armed with a 12.7 mm (cal .50) machine-gun.
The TOW-equipment was earlier mounted on Landrover half ton and the Ford M151A1.
Some of the vehicles have been upgraded to G3DK standard 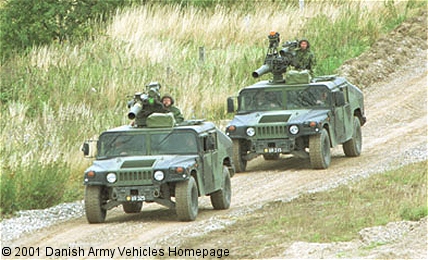 After trials in 1998 - 99 the HMMWV was chosen to supersede the Land-Rover 88 as platform for the TOW-launcher. 30 vehicles, which have replaced 60 Land-Rovers, were delivered via Hägglunds Vehicle AB in Sweden. The first "real" HMMWV to be implemented in the Danish Army.
The system was phased out without replacement in year 2010.
6 reload missiles are carried in the cargo compartment. The missiles carries a high-explosive, armour-piercing, shaped-charge warhead that when its hits an enemy tank, produces a concentrated heat stream that can burn through all but the latest composite armor.
The crew can rapidly dismount the system for ground use, if needed.
The Hummer TOW only carried TOW 2 or better in Danish service

Because the load capacity in the LARO 88 TOW was so low it always used a buddy system where 1 vehicle had the launcher (1 Ready and 1 Reload) and the other had 6 reloads. That what is meant up above with the 30 Hummers replacing the 60 Laro 88 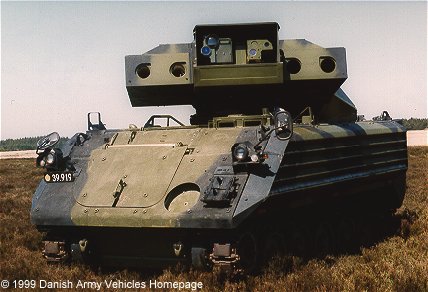 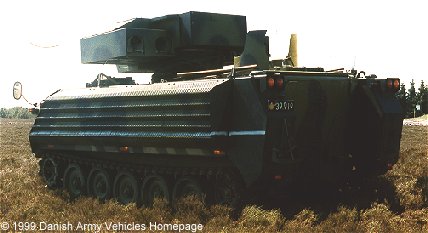 E.Falck Schmidt A/S, of Denmark, and Delco Defense Systems Operations, of the US, teamed up on the project in 1998, that will be available on a wide range of wheeled and tracked armored vehicles. The system was developed under the auspices of the Danish army and the first examples have been mounted on M113 tracked armored vehicles.
These vehicles were recently successfully demonstrated at the Borris Base Training Area in Denmark to Danish army chiefs, armor branch experts and other invited guests. This system is now undergoing fit-for-use trials by the Danish forces to determine if it can be formally adopted into service.
The Elevated TOW System (ETS) is a TOW weapon system, with a 2- or 4-tube launcher, and an elevated mast extending up to 6.5 meters above the ground. TOW-missiles can be launched from any position. This allows the system to operate, when deployed, maximizing the use of the terrain and other structures. The ETS enables the use of the full range of the TOW missile (including TOW-2A and TOW-2B).
While the vehicle is moving, ETS can be operated (locate targets, tracks targets and observe the battlefield). Once the vehicle has come to a complete stop, the TOW missile can be immediately fired. 4 missiles are ready to fire and 16 are stowed (in M113 vehicle). Reload time (under amour) 60 seconds.
Six hours of continuos operations are available independent of the engine. The mast can be elevated into firing position, ready for action in 10 seconds.
The ETS uses a stabilized gun/sight system with laser range finder and 2nd generation Gunner´s thermal sight with narrow and wide fields of view.
The crew consists of commander, operator and driver.
Options are Wide field-of view for battlefield observation, independent 360 degree low light television, datalink for battlefield data and targets, video recordings, integrated Command & Control system, GPS/magnetic compass navigation etc.
The vehicle are C-130 transportable.
The turret can be integrated on Mowag Piranha, Warrior, M113 and other chassis. 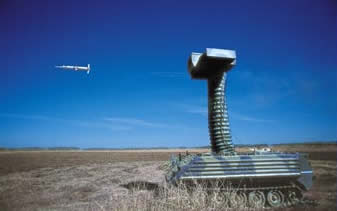 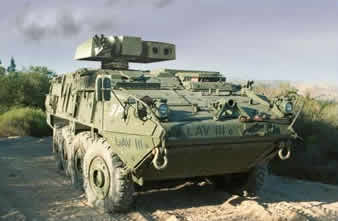 General
The Elevated TOW System (ETS-2) turret can be mounted as a fully integrated weapon system onto armoured vehicles, tracked or wheeled.
The tube-launched, optically-tracked, wireless-guided (TOW) weapon system under armour, provide accurate, long-range fire support to enhance the lethality, survivability, and manoeuvre of the combat team.
The Elevated TOW System – 2 is a further development of that in Iraq and Afghanistan combat proven ETS-1 system. The ETS-1 is integrated onto the US Army Stryker vehicle as the Anti-Tank Guided Missile (ATGM) variant and has been in operational use in all US Army Stryker Brigade Combat Teams since 2001.